Symposium on the uprising in Sobibor, the Nazi extermination camp 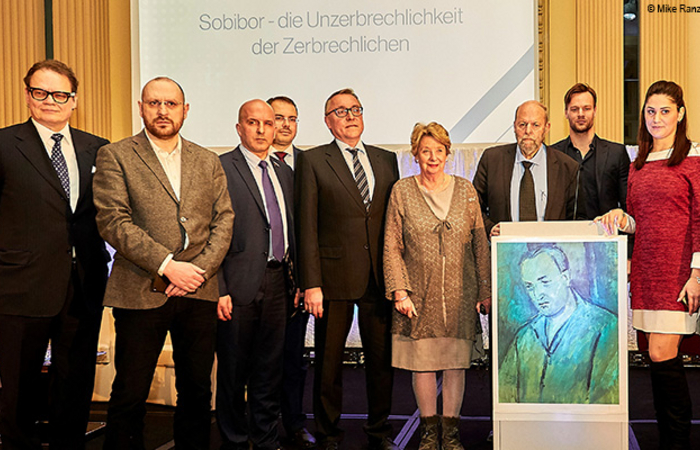 In collaboration with the Alexander Pechersky Foundation, on 22 March 2018 the FPÖ Education Institute held a service to commemorate the uprising in the Sobibor Nazi extermination camp in Grand Hotel Wien’s cinema auditorium. A fragment of the film “Sobibor”, which is scheduled for release in May 2018 in Vienna, was shown during the event.

Dr Klaus Nittmann, Head of the Education Institute, said in his introductory speech: “This evening is completely international and above party politics – just as it should be for a commemoration such as this. Here and today, we should be able to simply just come together as people.” He stressed that there could not and must not be any understanding, any words to quantify and, least of all, any justification for the crimes of the Second World War, and added that the memory of the murdered and displaced Jewish citizens provides an ongoing obligation to ensure that something like this should never be allowed to happen again. He continued by saying that the fact that anti-Semitism is on the rise again 73 years after the end of Nazism – a development which, once again, is rapidly spreading in the wake of uncontrolled mass immigration even within Europe – is all the more frightening. “In this regard, all political parties and all of civil society must be resolutely opposed to this highly dangerous development. This is why events like this one today are so important. Many of the brave rebels in Sobibor had to pay for their courageous actions with their lives. Every single one of them, both those who survived and those who died, are role models for us,” added Mr Nittmann.

Dmitrij Ljubinskij, the Russian Federation’s Ambassador to Austria, highlighted that over 250,000 people from the Soviet Union, Poland, Austria, Czechoslovakia, Slovakia, Germany, France, The Netherlands and other countries were exterminated in the Sobibor camp, which was part of the Third Reich’s huge death machine. He referred to numerous Russian archived documents and the initiative of the Alexander Pechersky Foundation, which led to Pechersky receiving high posthumous honours and, ultimately, also to the release of the film “Sobibor”, which he believes is another important step to preserving the historical truth. Mr Ljubinskij warned against cynical attempts to manipulate or even rewrite the history of the Second World War and praised Austria as a constructive example of a culture of remembrance, which helps to promote better understanding between peoples.

Nikolay Zemcov, MP and Co-Chairman of The Immortal Regiment of Russia, also stressed the importance of working together to preserve the memory and “pass it on to our children as a pledge that something like this must never be repeated.”

Dr Konstantin Mogilevsky, the Chairman of Russia’s History of Fatherland Foundation, said that the values Pechersky and his comrades abided by were their own dignity and the pursuit of freedom. “They brought these higher human values together; they weren’t prepared to simply suffer in silence and die. Regaining freedom was vital for them. The most important job we have is to keep the memory of these events alive and pass them on to the next generation.” Dr Mogilevsky believes that the film Sobibor is making a key contribution to doing everything possible to ensure that something like this isn’t repeated anywhere in the world.

Michael Kleiner, a former Member of the Knesset and President of the Supreme Court of the Likud Party, highlighted the fact that Pechersky is a shared hero for Israel and Russia alike, as he was originally arrested as Russian officer, but sent to Sobibor as a Jew. “He is a hero, both for the Jewish people and for Russia, but I believe that he has the right to be considered a hero of humanity, because he showed that you can fight against a seemingly unassailable power, which is a victory in the spirit of humanity.” He then continued by saying that we should never give up and always fight injustice, before going on to add that the Holocaust must stand outside of and above all political debates.

To conclude, Mr Kleiner said: “I’m truly delighted that the party which invited us – Russians and Israelis – here to Austria is the Austrian Freedom Party. Mr Strache has referred to the Holocaust as the greatest crime in human history, and he works hard to help Israel help the Jewish people. Not many people know that. I hope that my country, Israel, expresses the appropriate level of appreciation to the Austrian Freedom Party. But, you’ll know that Albert Einstein once said that it’s easier to smash an atom than prejudice. However, I believe we’ve come here to do just that.”

Alina Popova, a descendent of Pechersky, and Dr Iliya Vasilev of the Alexander Pechersky Foundation, also stressed that the symposium helps to preserve the memory of Pechersky and would contribute to ensuring that something like this would never happen again.

About the Sobibor extermination camp

Sobibor was a Nazi extermination camp that was built in 1942 and operated by the SS near the village of Sobibor during the German occupation of Poland. The camp was part of the secret “Operation Reinhardt”, which marked the deadliest phase of the Holocaust. Jews from Poland, France, Germany, The Netherlands, Czechoslovakia and the Soviet Union (including Jewish Soviet prisoners of war) suffocated to death in gas chambers. It is estimated that up to 250,000 people were murdered in Sobibor.

On 14 October 1943, there was a revolt and subsequent mass escape led by Lieutenant Pechersky, a Jewish prisoner and Red Army officer. Only 47 prisoners who escaped the camp managed hide and live out the war.

Shortly after the revolt, the Germans closed the camp, bulldozed the earth and planted it over with pine trees to conceal its location. Today, the site is occupied by the Sobibor Museum.