Publication “Freedom and the Austrian Republic”

On the 100th anniversary of the Republic 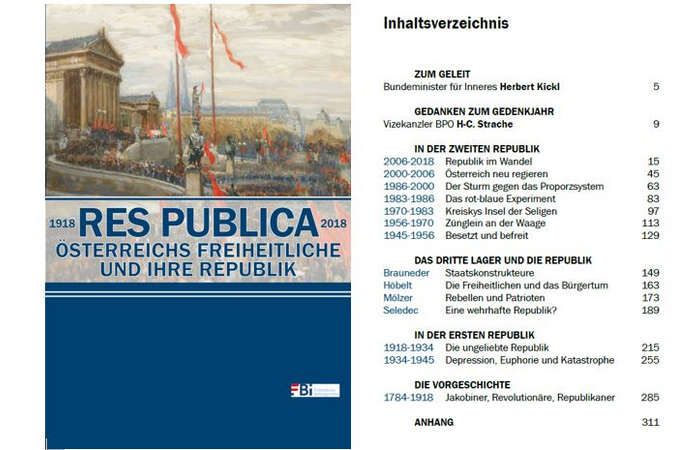 The national-liberal camp stood at the cradle of the Republic of German-Austria in 1918 and, as the strongest faction in the Provisional National Assembly, played a major role in the creation of the state. Franz Dinghofer, one of the three presidents of the Provisional National Assembly, proclaimed the Republic from the ramp in front of Parliament on 12 November 1918.

100 years later, in the Republic’s jubilee year, the national liberals once again find themselves in a crucial role as state supporters and, within the context of a centre-right coalition government, are once again involved in key aspects of the Republic.

This book, published by the FPÖ Education Institute to commemorate the 100th anniversary of the founding of the Republic in 2018, is intended to provide an overview of the Republic and of the main features of the relationship between the Republic and the national liberals. It highlights the path of the “liberals and their Republic” over the course of the past 100 years from different points of view.

You can read a digital version of the interview here: