with Václav Klaus on the podium 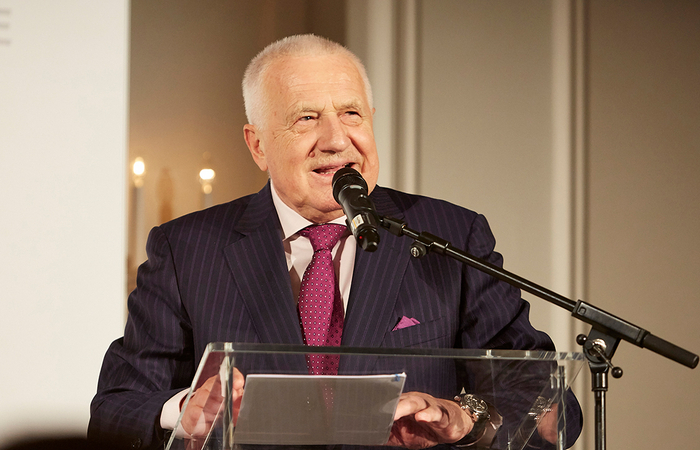 “Mass migration to Europe: Politics between responsibility and irresponsibility” was the title of a joint event held on 18 November 2016 in the Vienna music hall Kursalon Hübner by the FPÖ Education Institute and the Liberal Club.

The symposium participants addressed the questions of how responsible or irresponsible Europe's politicians are in the face of mass immigration and what impact this influx of people from a completely different culture, with different customs, values and religion will have on Europe and the individual nations.

Former President of the Czech Republic, Václav Klaus, urgently warned against the transformation of Europe through mass immigration, which is controlled by European elites. He described the "refugee crisis" as a migration of peoples to Europe, which represents a threat to our freedom and democracy. It was triggered by EU politicians such as Martin Schulz and Jean-Claude Juncker, led by Germany under Chancellor Angela Merkel, by inviting migrants in with their generous social policies.

A continuation of mass migration would destroy Europe even without terrorism. But this is in the sense of the "culture of welcome", which represents a continuation of the continuous transformation of European society, European culture, its traditions and values. He quoted from an essay by Italian writer Umberto Eco, who wrote 26 years ago: "Migration will result in the ethnic transformation of European countries, inconceivable changes in customs and behaviour, an unstoppable hybridisation of people.”

Klaus stressed that it was necessary to stand up to it and appealed to the audience not to accept the surrender to migration.

Chairman of the Federal FPÖ party, Heinz Christian Strache, again criticised German Chancellor Angela Merkel because of her irresponsible invitation policy and the EU, which previously was not willing to protect its external borders in accordance with applicable EU law. The only honourable exceptions are the politicians of Eastern Europe, such as the guest speaker Václav Klaus or the Hungarian Prime Minister Viktor Orbán. Many refugees would not have fled to Europe if they had been cared for in safe UN camps in their countries of origin. Due to the lack of security on the EU's external border, however, countless people - especially young men fit for military service - have come to Europe to choose their destination here.

The liberal presidential candidate Norbert Hofer recalled that the “refugee crisis” had been foreseeable long before it broke out.  The Austrian Ministry of the Interior had been warned. However, Austria failed to make timely contact with the states that are on the path of the refugees. Instead, countless refugees were sent uncontrolled through Austria last year. The federal government thus committed a breach of law, which must be avoided in the future.