Have we learned from history? New antisemitism in Europe 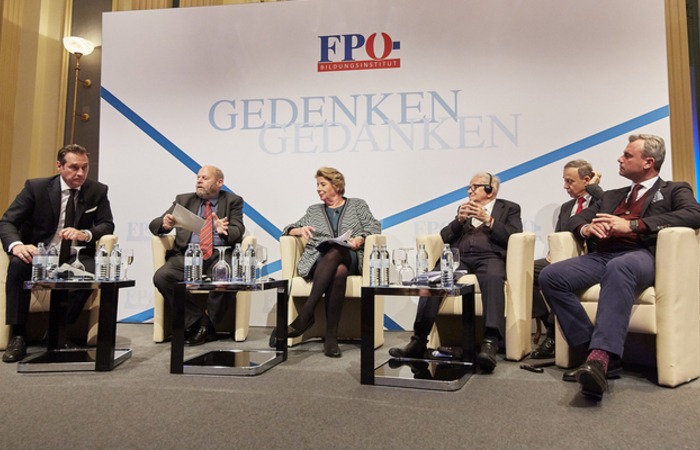 On Monday 7 November 2016, the FPÖ Education Institute held a symposium on the topic “Have we learned from history? New antisemitism in Europe” with Rafael Eitan (retired Knesset Minister, former Chief of Coordination between Shin Bet and Mossad, Commanding Officer in charge of the team which captured Adolf Eichmann, and Anti-terrorism Advisor to Menachem Begin), Norbert Hofer (Third President of the National Council and Austrian presidential candidate), Michael Kleiner (retired Knesset Minister, President of the Supreme Court of Netanyahu's Likud party and member of the board at the “Ghetto Fighters’ House Museum”) and Heinz-Christian Strache (Chairman of the Freedom Party [FPÖ] and Chairman of the FPÖ Parliamentary Fraction). The symposium was hosted by Ursula Schweiger-Stenzel.

The purpose of the event was to combat the growing antisemitism in Europe. Heinz-Christian Strache said: “Antisemitism, in whatever form it takes, is a crime against humanity and contrary to human decency.” Our murdered and displaced Jewish fellow citizens are “a reminder and an obligation never to permit such an atrocity again”. In this context, Strache also warned against increasing Islamism in Europe as the result of mass immigration, and against dangerous developments in Turkey, criticising at the same time the left-wing parties which made unrestricted immigration possible. According to Strache, the import of Islamic antisemitism into Europe would be contrary to the values of Konrad Adenauer or Helmut Kohl.

Norbert Hofer also stressed that radical tendencies had no place in Austria. We must learn from the past and no longer permit such hatred. According to Hofer, Europe’s silence in this context was a big mistake. “Europe has become despondent. Europe is not in a position to take a stance and assume responsibility, even if the mainstream paints a different picture”, explained Hofer. He went on to state that Austria could be “the strong voice of Europe”: “We have a responsibility to the younger generation and to the future of our country – and radical tendencies have no place in our future!”

You can watch the live recording HERE.