"60 years of the FPÖ": Symposium and Ceremony

Anniversary of the party's foundation on 7 April 1956 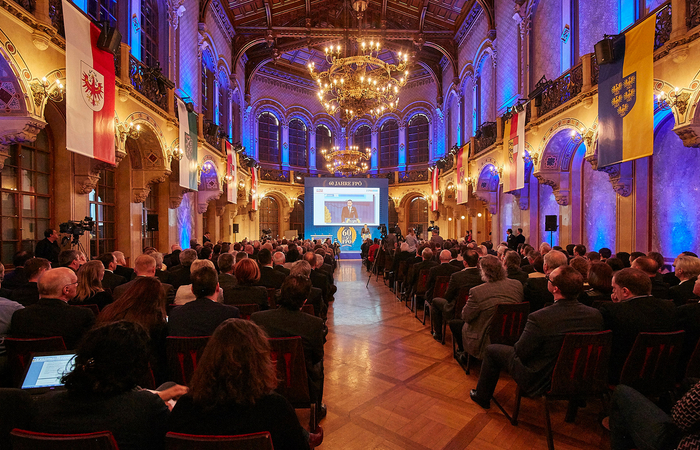 The Freedom Party of Austria was founded in Vienna 60 years ago. The FPÖ Education Institute was invited to a symposium and ceremony on the occasion of this anniversary of the founding of the party on 7 April 1956.

As part of the ceremonial event, the Freedom Party recalled its eventful history.

At the beginning of the ceremony, after welcoming the numerous guests - chaired by Viennese FPÖ politician Ursula Schweiger-Stenzel - Hilmar Kabas, President of the FPÖ Education Institute, took to the podium. Among the guests of honour were not only former FPÖ government politicians, led by former Vice-Chancellor Dr Norbert Steger, but also the two incumbent deputy state governors Dr Manfred Haimbuchner from Upper Austria and Johann Tschürtz from Burgenland, as well as a number of other historical personalities, including a number of members of the founding party conference.

A video by the FPÖ Education Institute depicted the ups and downs in the history of the party, including interviews with prominent eyewitnesses and co-creators of liberal activity, starting with Friedrich Peter and Dr Alexander Götz and Dr Norbert Steger, right through to Dr Jörg Haider and the current Chairman of the Federal FPÖ party, Heinz-Christian Strache.

In many political fields, the FPÖ today has made significant contributions to shaping democracy, the rule of law and communities, said HC Strache, making it clear that the welfare of Austria and its people was the guiding principle for the work of the FPÖ and that this would never be lost sight of. This will be increasingly perceived not only by the population, but also by the political competitors.

After further speeches given by the guests of honour, such as Vienna's FPÖ Deputy Mayor Johann Gudenus, the Burgenland Deputy State Governor Johann Tschürtz, the Upper Austrian Deputy State Governor Dr Manfred Haimbuchner as well as the Styrian FPÖ Club Chairperson and member of the state parliament Mario Kunasek, the guests had the opportunity to visit an exhibition of the FPÖ Education Institute on the history of the Freedom Party of Austria in a hall at the Palais Ferstel.