The History of the FPÖ: Part 8 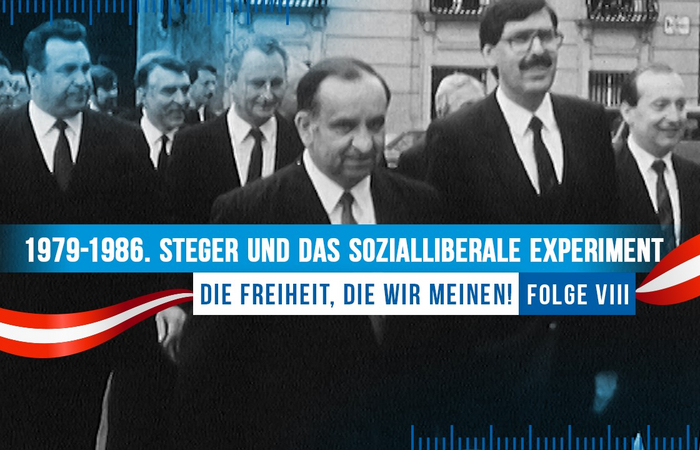 We have just published Part 8 of our documentary series on the history of the national-liberal Lager and the FPÖ. Watch the film "Part 8: 1979 - 1986. Steger and the social-liberal experiment"

The Freedom Party of Austria came into being on 7 April 1956 at a founding party conference. In its name it bears the word "Freiheit" (freedom), which is considered a core element of its programme. However, the roots of this national-liberal community of shared beliefs go back to the early 19th century. In our new series we illuminate the history of the national-liberal Lager and the FPÖ:

After the long-term Party Chairman Friedrich Peter had resigned in 1978 and been briefly succeeded as party leader by Alexander Götz, Mayor of Graz, the lawyer Norbert Steger was elected FPÖ Party Chairman in March 1980. Moulded by the “Attersee Circle”, a liberal think-tank founded under Peter, the new party leadership around Steger wanted to turn the hitherto markedly national FPÖ into a "flawless" liberal party.

It is true that the FPÖ was able to achieve only a modest result in the 1983 elections to the National Council, namely around 5 percent of the vote. However, electoral arithmetic made it possible for the FPÖ to still win 12 National Council seats, while the SPÖ lost its absolute majority for the first time since 1971. In this situation, Friedrich Peter's tactic of drawing closer to the Socialists paid off; as Chairman of the FPÖ Parliamentary Group, he negotiated with Bruno Kreisky the terms of a “Small Coalition” and from 1983 to 1986, the SPÖ formed a red-blue coalition with the FPÖ led by Norbert Steger, initially under Chancellor Fred Sinowatz and then under his successor Franz Vranitzky.

In this Federal Government, the FPÖ was represented by Steger as Vice-Chancellor and Minister of Trade; Harald Ofner as Minister of Justice and by Friedhelm Frischenschlager and later Helmut Krünes as Minister of Defence. However, the coalition had to struggle with enormous problems. These included an exploding budget deficit and the precarious situation in nationalised industries.

At the same time, trouble was brewing within the FPÖ electorate. For one, there were discussions about the FPÖ’s ideological direction, as articulated above all in the new party programme of 1985. This was scarcely accepted by more national-oriented supporters of the Freedom Party.

Meanwhile, in Carinthia the young up-and-coming politician Jörg Haider was on his way to becoming the harshest critic of the FPÖ government team. In May 1983 Haider had been appointed Managing Chairman of the Carinthian FPÖ and was soon able to score points with his outspoken opposition to the federal party.

Moreover, the FPÖ’s decision not to nominate its own candidate at the 1986 federal presidential election was judged too great a concession to the SPÖ and in the eyes of numerous FPÖ party officials, enough was enough. This also meant that Steger's attempt to transform the FPÖ into an enduring liberal governing party along the lines of the German FDP had failed.

When opinion pollsters predicted in the summer of 1986 that the FPÖ would receive barely more than 3 percent of the vote at the next National Council election, many in the party considered the only possible salvation to be Jörg Haider’s election as Chairman. As a result, in September 1986 in Innsbruck, the Chairmanship was contested between Steger and Haider and the Viennese Steger lost the vote to the Carinthian provincial party leader. Shortly thereafter, SPÖ Chancellor Vranitzky terminated the red-blue coalition and Austria went into new elections.

Overall therefore, the lesson of the FPÖ’s first participation in a Second Republic government remains ambivalent. Although that government failed prematurely, historically the red-blue government can be considered to have been akin to a completion of the integration of the historically-rooted Third Lager into the political system of the Republic.