The History of the FPÖ: Part 5

The Return of the Third Lager after 1945 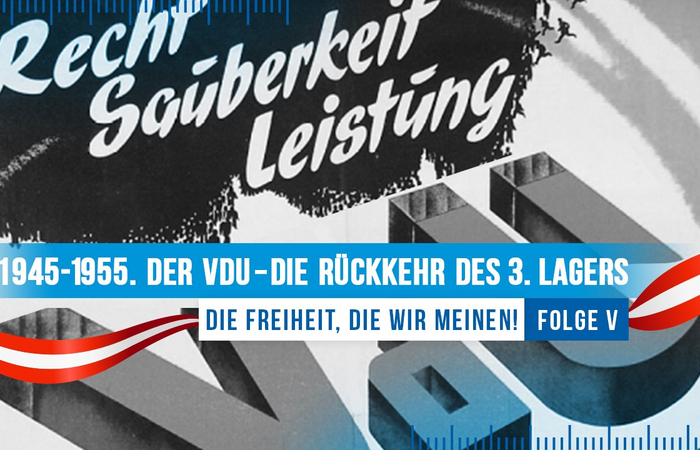 We have just published Part 5 of our documentary series on the history of the national-liberal Lager and the FPÖ. Watch the film "Part 5: The return of the Third Lager after 1945. The rise and fall of the VdU"

LINK to YouTube: The Return of the Third Lager after 1945

The Freedom Party of Austria came into being on 7 April 1956 at a founding party conference. In its name it bears the word "Freiheit" (freedom), which is considered a core element of its programme. HNewsdetailowever, the roots of this national-liberal community of shared beliefs go back to the early 19th century. In our new series we illuminate the history of the national-liberal Lager and the FPÖ.

Part 5: The Return of the Third Lager after 1945. The rise and fall of the VdU

After the Second World War, the Republic of Austria was re-established in 1945. Initially, only three parties were recognised by the Allied occupying powers.

These were the Christian-conservative Austrian People’s Party (ÖVP), the Socialist Party (SPÖ) and the Communist Party (KPÖ), which together formed the Provisional State Government headed by Karl Renner.

For the time being, the national-liberal Lager was excluded from political participation in the founding period of the Second Republic. This was in part because all former members and party candidates of the NSDAP and other Nazi formations – regardless of whether they had been involved in crimes or not – were deprived of the right to vote. Thus, at the time of the first National Council elections in 1945 there were about 600,000 “second class” citizens in Austria who were deprived of essential political rights.

It was not until spring 1949 that Herbert A. Kraus and Viktor Reimann succeeded in founding the “Verband der Unabhängigen” (League of Independents, VdU). This new party was constituted in Salzburg since it was much easier to found a party in the American Occupation Zone. However, the VdU was registered as an association, as it could not obtain an Allied “party licence”. On the one hand, the VdU wanted to lead back into Austria’s political landscape the historically rooted national-liberal Lager – which prior to 1938 had accounted for almost 20 percent of the electorate. On the other hand, it wanted to integrate the National Socialist Lesser Offenders, who had until then been excluded from political participation. They had in 1947 their right to vote restored by the National Socialists Law.  Returning prisoners of war and ethnic German expellees from Central and Eastern Europe were also a target group for the VdU.

At the Second National Council election of 1949, the VdU won around 11.7 percent of the vote with the Electoral Party of Independents (WdU) and thus 16 National Council seats. These successes continued at several provincial elections. The VdU’s “social manifesto” of 1950 can also be seen as an attempt to win over the working class. Nevertheless, the VdU became increasingly politically isolated – not least as a result of the behaviour of the ÖVP and SPÖ – and as a consequence disputes broke out within the League.

After losing votes at the National Council elections of 1953, the differences intensified between the national and liberal wings of the VdU, as well as between the many strong personalities such as Viktor Reimann, Willfried Gredler, Gustav Zeillinger and Helfried Pfeifer. In May 1954, at Bad Aussee the VdU approved a new programme with a stronger national emphasis and also sought dialogue with the recently-founded Freiheitspartei (Freedom Party). Yet following considerable losses at further provincial elections in 1954, the VdU was already showing signs of disintegration. Thus in 1955, negotiations took place between representatives of the VdU and Anton Reinthaller’s markedly national Freedom Party, which had already formed an electoral pact with the VdU and independents at the 1955 Upper Austrian provincial elections.

On 17 October 1955, the VdU and Reinthaller's Freedom Party finally agreed in Vienna to merge to form the FPÖ. This laid the foundation for a successor party that would decisively shape political events in Austria to this day.