The History of the FPÖ: Part 7 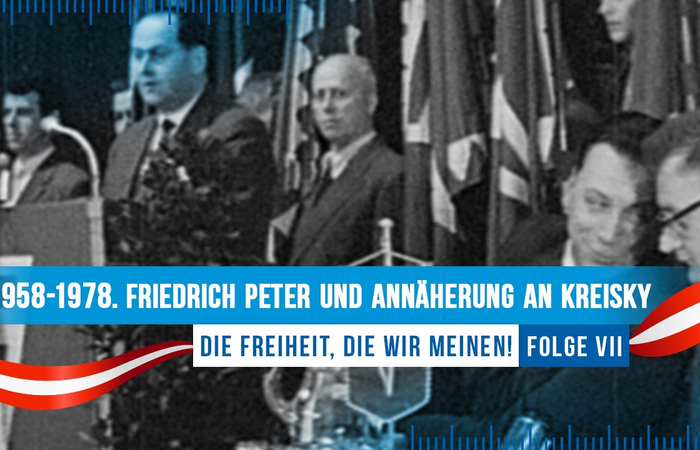 We have just published Part 7 of our documentary series on the history of the national-liberal Lager and the FPÖ. Watch the film "Part 7: 1958 - 1978. Friedrich Peter and drawing closer to the SPÖ under Kreisky"

LINK to YouTube: Friedrich Peter and drawing closer to the SPÖ under Kreisky

A national-liberal party of notables. The Friedrich Peter era

The Freedom Party of Austria came into being on 7 April 1956 at a founding party conference. In its name it bears the word "Freiheit" (freedom), which is considered a core element of its programme. However, the roots of this national-liberal community of shared beliefs go back to the early 19th century. In our new series we illuminate the history of the national-liberal Lager and the FPÖ:

After the death of Anton Reinthaller, Friedrich Peter was elected Federal Party Chairman of the FPÖ in 1958. Having led the party for just under 20 years, Peter remains its longest-serving leader.

The Upper Austrian Peter also managed finally to lead the FPÖ out of its domestic political isolation. For the FPÖ succeeded for the first time in forging mutual alliances in parliament, for example with the SPÖ on the question of the Habsburg Laws and Otto Habsburg’s return to Austria. With Members of Parliament such as Tassilo Broesigke, Otto Scrinzi and Gustav Zeillinger, the Freedom Party was in due course able to make its mark in the National Council as a national-liberal party of notables and as a pivot, tipping the scales between the People's Party and the Socialists.

This is why the FPÖ had high expectations for the 1970 National Council elections, launching itself into the campaign with the slogan "No red Chancellor, no black single-party government". In the end, however, the FPÖ National Council election result stagnated at 5.5 percent. Nevertheless, Friedrich Peter seized the opportunity and in return for agreeing to support the SPÖ minority government under Bruno Kreisky, was able to achieve electoral law reform that was favourable to the Freedom Party.

When National Council elections took place under the new regulations in October 1971, the FPÖ was able to increase from six to ten its number of parliamentary seats in a chamber that had been enlarged from 165 to 183.

Under Friedrich Peter, the FPÖ also initiated a process of programmatic modernisation. In 1968, the more modern "Ischl Party Programme" was adopted in Bad Ischl, and at Peter's suggestion, the so-called "Attersee Circle" was founded, a working group for young and more liberal-oriented intellectuals, one of whom was the later Party Chairman, Norbert Steger. The "Attersee Circle" subsequently provided valuable stimuli for the modernisation of the party and, among other things, took on the preparatory work for the "Freiheitliche Manifest zur Gesellschaftspolitik” (“FPÖ Manifesto on Social Policy"). Adopted in 1973, it already contained a chapter devoted to environmental protection.

However, the later years of Peter's chairmanship were overshadowed by Simon Wiesenthal's highlighting from 1975 onwards of Peter's Second World War role within the Waffen-SS, though SPÖ Chancellor Bruno Kreisky, a friend of Friedrich Peter, took Peter's side. The affair ultimately also prevented Friedrich Peter being elected as Third President of the National Council. Following internal party disputes about Peter's past, Alexander Götz became the FPÖ’s new Party Chairman in 1978. Yet until 1986, Friedrich Peter remained Chairman of the FPÖ Parliamentary Group in the National Council.

Friedrich Peter became increasingly estranged from the FPÖ after the election of Jörg Haider as Party Chairman in the autumn of 1986, a development that culminated in his resignation from the party in 1992. Peter's relationship with his former party remained tense until his death in September 2005. Nevertheless, it can be considered an historical achievement of Friedrich Peter to have anchored the FPÖ and thus the Third Lager as a stable factor in Austrian domestic politics.